Now we finally know what clearly talented (but always kinda/sorta trifling) choreographer Larry Keigwin can achieve with a little motivation—plus modern dance brahmin Paul Taylor’s full complement of assassin-grade dancers. Rush Hour unleashed a swarm of ruthless worker drones to construct a set of roiling human mazes. It was a kinetic preview of a dystopian future where interpersonal, corporate and political structures remain in constant flux, and those cutoff lanes are (literally) murder.

When those sinister electrical cables started slithering, of their own accord, across a dimly lit stage and out into the audience, this dance/ theater dark ride took us through a creepy emotional underworld reminiscent of the work of David Lynch. Gradually we realized that the stylized showfolk, backstage technicians and other denizens from the showbiz side of life were actually sub-personalities of one central character: a grieving man whose psyche has shattered after an unbearable tragedy. This colony of the lost desperately kept an unacceptable reality at bay with cirque moves, stage management pragmatics and old-school Vegas razzle-dazzle on Jay Gower Taylor's unclean industrial set. Then the crew realized that Young's character was actually dying.

In this final chapter of his multi-year Analogy project, Jones warns us that gay and lesbian history too often remains, in René Char’s words, an inheritance left by no testament. The dancers and characters in this adaptation of W.G. Sebald’s The Emigrant get glimpses into the life of a marginalized, deceased gay uncle from a handful of photographs and a cache of old letters. But, try as they might in this cautionary tale, they ultimately fail to reconstruct his life. 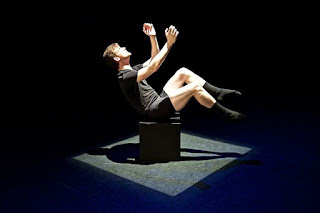 Arlynn Zachary’s revelatory choreography was an apt visual translation of the title, which refers to the intricate and sometimes obsessive scenarios we repeatedly play out in our head, before or (more often) after an important conversation. Jacob Brown’s crisp, precise and high-velocity solo in the Emergence showcase was an antidote for parts of a dance community that have become complacent with lackluster technique and unexplored physical boundaries. 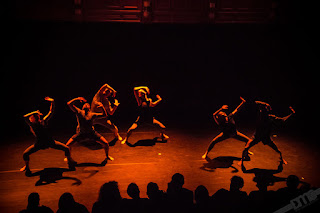 Comerford's new ensemble work represented a significant development: a series of uncertain encounters with the Other across international, intercultural & interpersonal borders, in response to the polarization that's been turning us into “a nation of Others” since the 2016 elections. In this still emerging work's first stagings, design elements smoothed over some of the starkest verities Comerford and her dancers had discovered. In rehearsal, its nuanced social metaphors and raw emotional realism reminded me of Pina Bausch.
Posted by Byron at 10:17 AM